Once again, I'm dragged to Brooklyn to an other inspiring and beautiful adaptive reuse project. This time, Archtober led me to visit Kickstarter's headquarters, designed by Ole Sondresen architect.

This post won't be a full report as the one from Camila Schaulsohn here but a bunch of pictures and a few interesting points explained by the architect.

Fed up with moving from one place to the other, Kickstarter was looking for a place which would be cheap, adaptive and large enough to foresee a fast growth. They found this building, supposed to become an hotel. Except from the façade, which is a registered landmark, there was only a concrete slab under the street level, steel columns and a first level slab.

The firm has a young, open-minded and shared community spirit, which is perceptible in the spaces organization. Beside, an art gallery is open to the public and used by the local community.

The kitchen and the dining room, a large shared open space.[/caption] 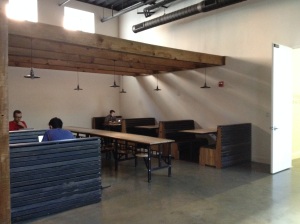 A more intimate space for lunch or for phone calls.[/caption]

A central courtyard brings light down to the center of the ground floor. The garden is planted with only local species and works as a rain water reservoir.

The discarded slab steel trusses are reused to support the new glass façade.[/caption]

Major structural reinforcements had to be managed to handle the significant modification of the patio creation.[/caption]

The theater, or screening room, is 74seats. It could fit more but 74 is the threshold above which you avoid drastic building rules. The seats itself were collected from a closing theater.

The walls are covered with very efficient sound proofing panels. Lighting is by LED bulbs.[/caption]

The architect, before a carpenter, is very sensitive to wood materials and tree species in terms of finishes. Each reused and raw materials available has been affected to a location its finish and natural features fitted the best.

A simple natural treatment can alter the wood's finish.[/caption]

This wood's color is perfect for the concrete next to it. This concrete is specially rich in ashes, which makes it more sustainable.[/caption]

We soon understand the architect's position as fundamentally sustainable. Even LEED certification sounds ridiculous when it is about adding specific materials, which are unnecessary in that case. Here, it is about doing the best with the less. Being clever and find adaptive solutions is sometimes more efficient than adding high tech inadequate systems. Also, on-site materials and local ressources are systematic considerations.

A large open space houses the workers, including the firm founders.[/caption] 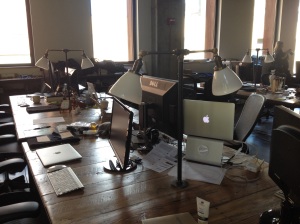 The lamps were made in Brooklyn, from discarded plumbing pieces.[/caption]

Here again, wood is cleverly used with raw finishes to separate the desks from a cosy lounge.[/caption] 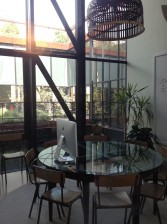 A number of additional rooms, of different sizes and different styles, are designed for phone calls and group meetings.[/caption]

The library is an other wood paradise. It actually feels great in that room! 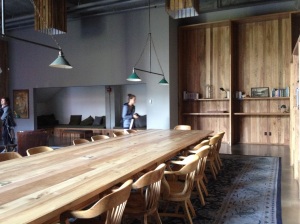 The large table is for large group meetings.[/caption] 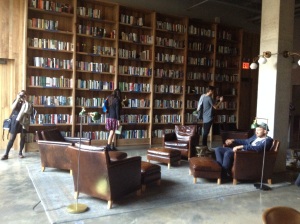 Behind the shelves, small alcoves enable concentration and privacy.[/caption]

As we keep going up, we soon discover the rooftop, which is a natural haven. Directly opened to the garden, a luminous room is in between outdoor and indoor.

Light osier chairs and soft wooden carpet make you feel like you're in your comfy holiday house.[/caption]

The local species have been selected to be self-sufficient. They don't need any care. The trees are not full seized yet but the structure of the building is designed to support fully grown trees.[/caption]

The rough corten steel beam encircles the rooftop terrace. Across the street, we can see a more traditionnal conversion of a brick building.[/caption] 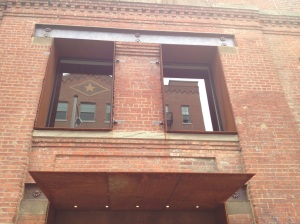 The windows are all existing openings. As the interior side of the opening was of bad finish, simple corten steel sheets were added to finish the openings.[/caption] 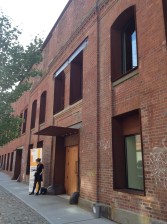 All in all, this design gives a great image to Kickstarter. I hope the spatial features are reflexions of the start-up's social attitude.

Above all, the architect's attitude towards sustainability is very interesting. The word is here fully weighed and not limited to checking a list of boxes. Everything has been carefully thought to be as energy efficient, health harmless and use-adaptive as possible.

Thanks Ole Sondresen for this great building!